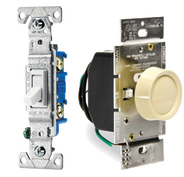 Enter Logistic Regression.  Logistic regression is to statistics what a dimmer switch is to light. It is a technique to measure and predict likelihood. It helps you understand in between. It takes discrete data and turns it into continuous (or tries too). Instead of the light being on or off there are shades of light.  Instead of voting or not voting there are smooth curves.

0's and 1's
Imagine I wanted to understand and model the odds of a person voting by age.  The following table has two columns.  The first is labeled voted  and the second is labeled age.  A person voted  (Vote = 1) or they did not vote (Vote = 0) .    This is discrete data.  Age is continuous data.

Now imagine millions of these rows of zeros, ones and age!  With a little help from Python, logistic regression takes this data and turns them into odds and a nice smooth curve (see graph below). 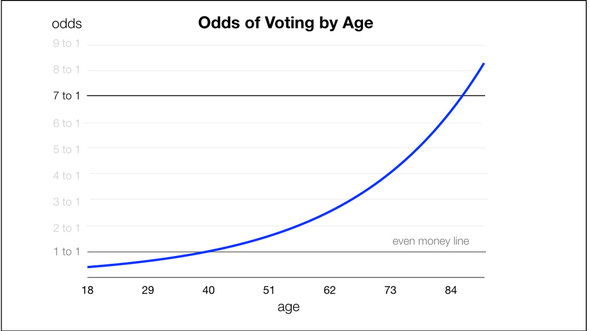 Figure 1
Odds of Voting
Voting odds are expressed as voted (o) and not voted (1).  The chart (Figure 1) was created from voting data collected by individual states for the last general election (November 2014).  It models the likelihood of a person voting by age (blue line). There is not much argument that the odds of a person voting increases with age. What logistic regression helps to do is to quantify the likelihood or odds.


Odds Across Time
Logistic regression allows comparison over time.  In the 2008 general election (when President Obama was first elected), the odds for someone in their twenties to vote was 1 to 1 or even money.  They were as likely to vote as not to vote.  But by the 2014 midterm election their odds dropped to 1 to 2.  They were twice as likely not to vote as to vote.

Voting Models
Voting models can be complex.  In this article I only discussed the odds of voting or not voting.  In future articles, I plan on presenting models that help predict if a person votes, what are the odds they will vote for a specific candidate.   These models include a lot of variables beyond age.  They include income, education, geography, and gender to name a few.  They can also include more discrete variables such as do they listen to NPR or Fox News.

Figure 2
The Math
I built the equation (Figure 2)  for 2014 general election. I plan on creating a video that explains how the actual math is calculated.  I used python script to derive the equation using nearly 2 million active registered voters. Again, if you are not familiar with logs or regression, then the math is going to be hard.


More On Odds
In the movie Dumb and Dumber the character Lloyd, played by Jim Carrey, asks the attractive red head  (Mary Swanson) what are my chances of getting together with her.   Her eventual response is "one out of a million."  Lloyds response is " so you're telling me there's a chance." Mary Swanson's character was played by Lauren Holly.  In a bit of movie irony Lauren Holly and Jim Carrey would get married in 1996 (two years after the movie).  So I guess he had a chance after all, but they divorced in 1997.